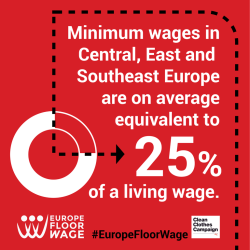 According to recent figures by the Clean Clothes Campaign, clothing workers are on average poorer when they earn the applicable minimum wage. The share of the minimum wage as part of the EU poverty line fell from 65% to 61% between 2018 and 2021, despite nominal increases in minimum wages in many countries. And in Eastern Europe and Turkey, garment workers often earn less than their colleagues in the Far East.

For the full story, see the September 2022 edition of Textiles Eastern Europe.